Gap between aspiration and action

Aspirations for churches to do more about indigenous justice and reconciliation

While a minority of churchgoers themselves take personal action on reconciliation, they express significant support for their churches to be more proactive.

In the 2016 NCLS around four in ten church attenders reported having taken some form of action in the previous 12 months to encourage indigenous reconciliation, awareness or relationship building (including staying informed on indigenous issues). However some 62% agreed that churches should more actively promote reconciliation, and almost half (48%) agreed that their local church should do more to build relationships with Aboriginal people.

Attenders' aspirations show there are further roads to travel in churches, when it comes to justice and reconciliation with the first peoples of Australia.

Among the denominational groups, Pentecostal churches were the most likely to have attenders who mixed regularly. Where you live appears to determine the amount of direct personal contact, with 61% of urban-dwellers reporting that they did not know an Aboriginal person as opposed to only 20% of those residing in rural areas. Churchgoers born overseas were least likely to know Aboriginal people.

When asked individually what they themselves had done in the previous 12 months, almost six in 10 attenders (59%) said that they had done nothing to encourage indigenous reconciliation/awareness/ relationship building (see figure below).

Of those churchgoers who have acted on these issues, “Made an active effort to stay informed on indigenous issues and policies” was the largest action (16% of attenders). In a nation where Aboriginal and Torres Strait Islander peoples regularly ask for non-indigenous citizens to stand with them in policy and cultural issues only 4% of church attenders had engaged in public advocacy.

It also should be highlighted that in a nation where Aboriginal and Torres Strait Islander people fall behind on almost every measure of health and well-being, and where indigenous families are at a socioeconomic disadvantage, that this same set of disadvantages translates into the income and resources available to local Aboriginal churches, ministries, and congregations across the nation. When this background is considered, the very low level of church attenders reporting making financial contributions (4%) to the task of reconciliation is noteworthy.

Despite the low levels of personal contact and individual action, when asked whether “churches should more actively promote reconciliation” 62% of churchgoers agreed. This finding reveals that the majority of Australian church attenders have a desire that their churches take action on reconciliation. Further, some 48% agreed that their local church should do more to build relationships with Aboriginal people, with 43% being neutral or unsure.

Attenders' hopes for their churches to be more proactive, against a backdrop of low levels of individual mobilisation, show there are further roads to travel in churches when it come to justice and reconciliation with the first peoples of Australia. 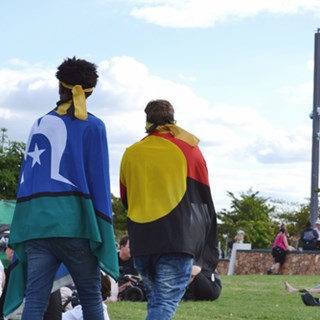 Church actions and connections with indigenous people and culture