Which religions do Australians affiliate with?

Religious affiliation has declined over time, yet six in ten Australians continue to claim a religious identity.

The table below uses Census data to represent religious identity across more than 100 years. It shows how our national religious profile has changed significantly over this time. 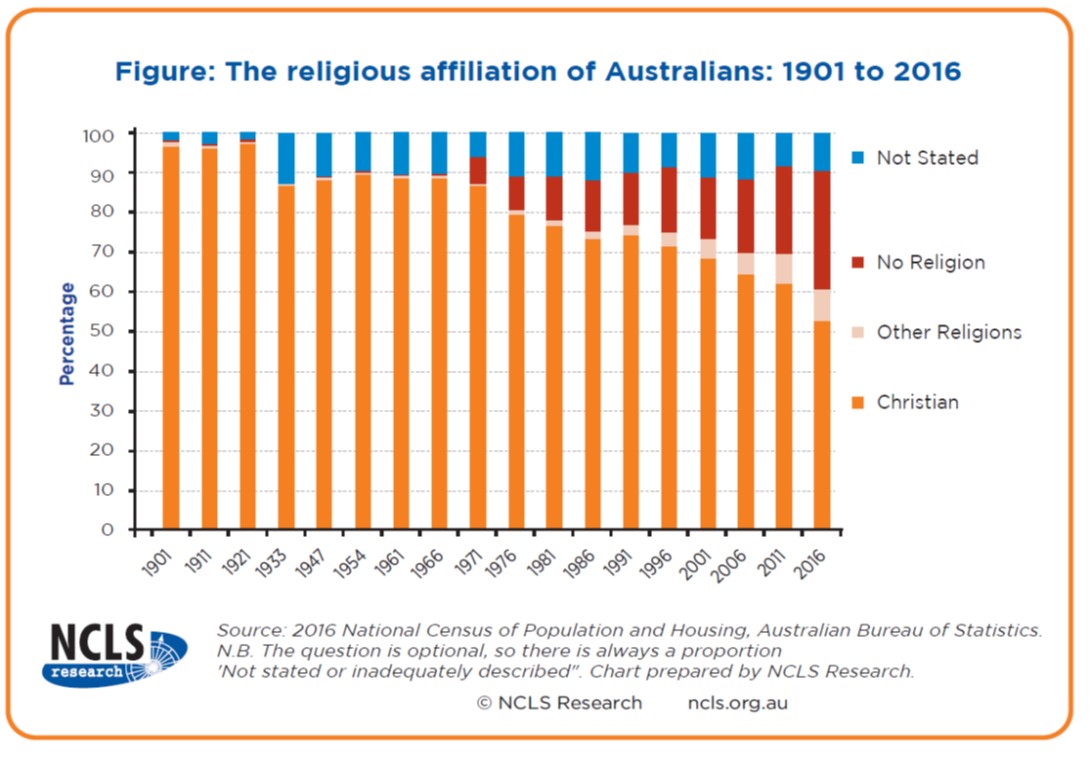 No religion on the rise

Religious diversity has been an increasing trend over recent decades. In 2016, of the 8% of Australians who identify with a non-Christian religion, 2.6% nominate Islam, while 2.4% select Buddhism. A further 1.9% of Australians affiliate with Hinduism, 0.5% Sikhism, 0.4% Judaism, and another 0.4% chose other religions.

It should be noted that in 2016, 10% of Australians did not provide an answer, as the religion question is voluntary. 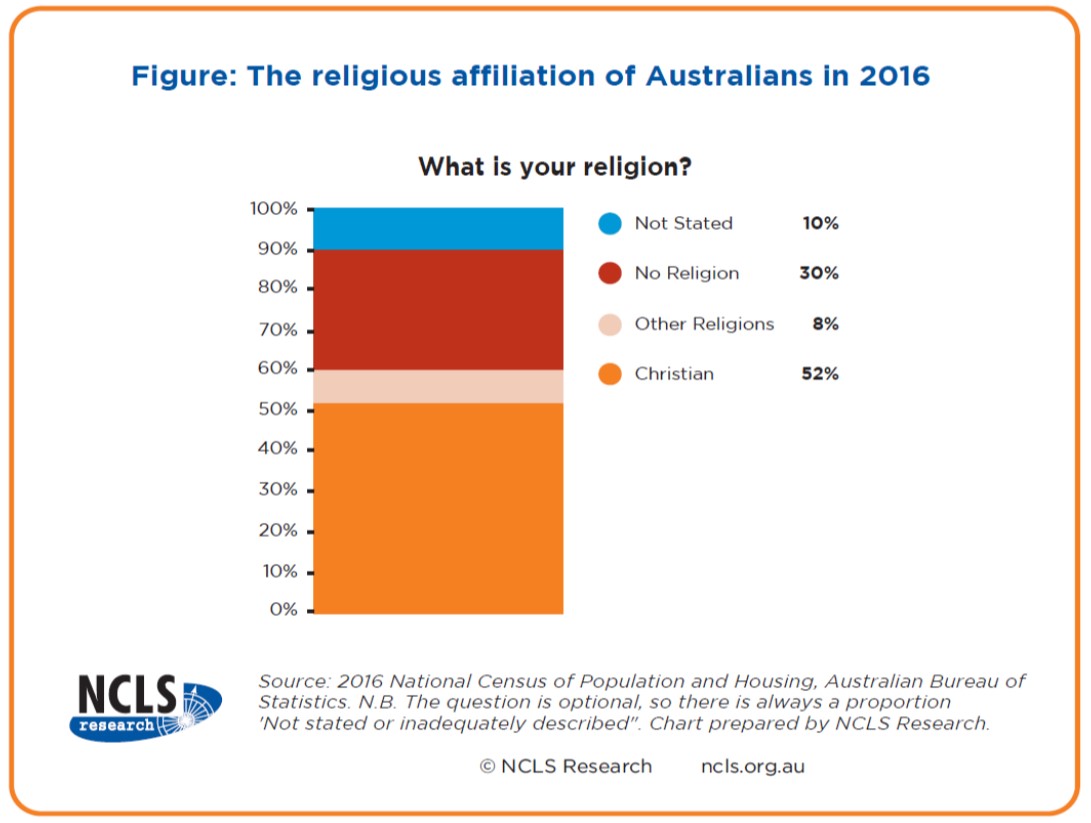 When we compare trends for different denominations in Australia a more complex story emerges.

The 2016 result shows the proportion of Australians who have 'no religion' is larger than any other religious group. This was the first time this has happened in the Australian Census. 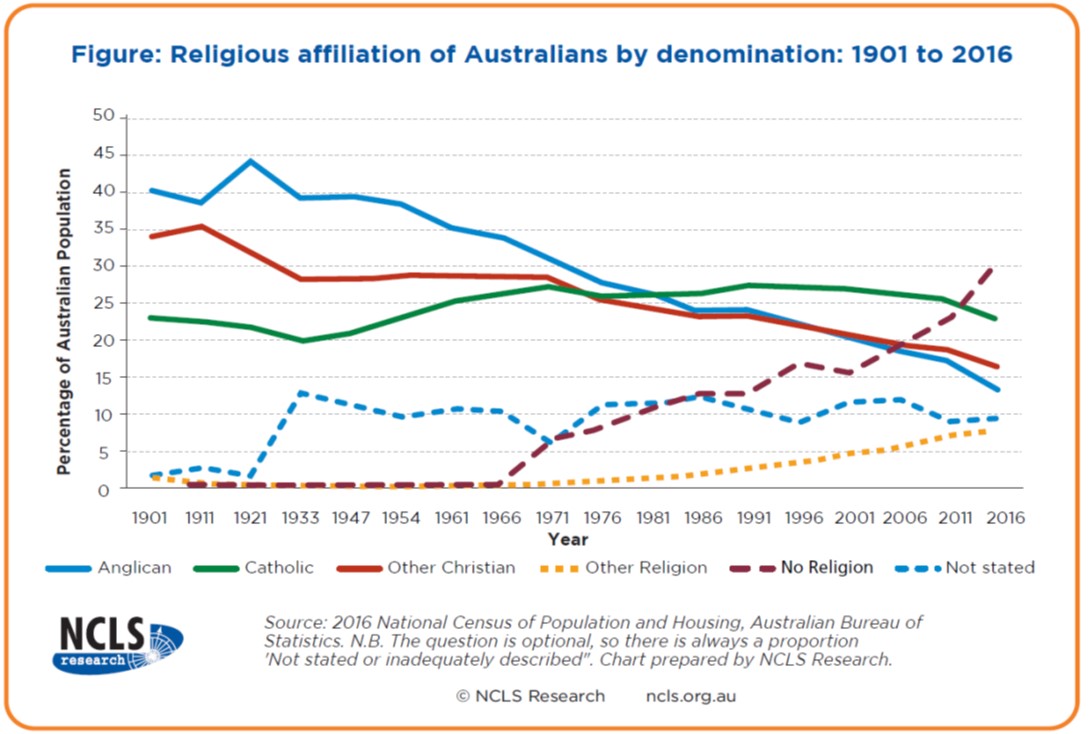 The figure above shows that a similar proportion of Australians identify as Catholic in 2016 compared to the beginning of the last century, 22.6% and 22.7% respectively.

The religious composition of immigrants coming to Australia is an important factor here in shaping the Catholic population. In 2016, a quarter of the 5,291,834 Catholics were born overseas.

Anglicans comprised the largest single group of Australians with a religious affiliation until the mid-1970s. However, by 2016 the proportion of Australians who identify as Anglicans has reduced by two thirds.

Furthermore, the overall trend is one of decline for all other Christian denominations together. Pentecostal churches are the only group that has seen a consistent increase in affiliation, between 1981 and 2016.

If the trends of the past century continue, then the coming decades may see an inversion, where the ‘no religion’ category may outnumber those practicing religions. 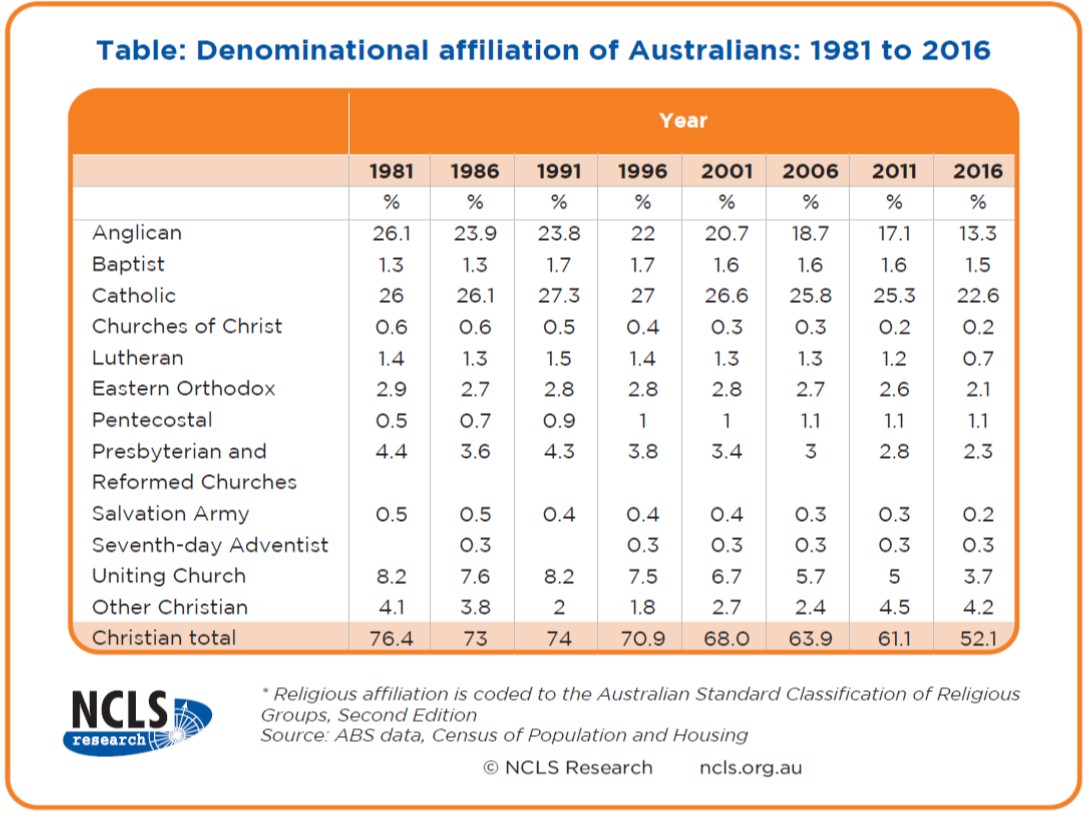 If the trends of the past century continue, then the coming decades may see an inversion, where the ‘no religion’ category may outnumber those practicing religions.

Other research findings shed light on the spirituality and faith practices of Australians, not necessarily linked directly to a formal religious affiliation. More detail on the trend of Australians seeing themselves as spiritual but not religious, can be found in the following article:

Results from the 2020 Australian Community Survey by NCLS Research also show that Australians are still engaging in spiritual practices to a moderate degree.  See these articles:

Did Australians draw on spiritual practices more or less during this year of crisis 2020?

An invitation to a new conversation about climate change

What is meant by the 'vitality' of local churches?