Home / Articles / How do Australian churches respond to domestic and family violence?

Domestic and Family Violence (DFV) is a serious and widespread problem in Australia. Victims are predominantly women and children, and DFV occurs in all communities, including communities of faith.

Many people turn to churches in times of need, so are our faith communities adept at responding to DFV? How are Christian church leaders helping those caught up in abusive situations?

We investigated the issue of domestic and family violence, using data from the 2016 National Church Life Survey, canvassing the views and experiences of both church leaders and attenders across Australia*. Here’s what we found:

Two thirds of church leaders have dealt with DFV situations

Our nationwide research shows that two-thirds (67%) of Australian senior local church leaders say they have dealt with DFV situations.

Older leaders more likely to have dealt with DFV

The older the leader, the more likely they are to have dealt with DFV situations.

There was very little difference in the experience of church leaders by gender (65% of female and 67% of male church leaders report had dealt with DFV situations).

The research results show that the response of clergy has mainly been to the victims rather than the perpetrators of DFV. The most common responses were referral and counselling.

Around 4 in 10 clergy said they provided marriage or couples counselling in response to DFV situations. This response, while still used by some church leaders, was used to a much lower degree than individual support or referral of the victim. Service agencies that support victims maintain that couple’s counselling is not best practice. It can be ineffective and unsafe in DFV situations, as it fails to address the unequal power in an abusive relationship and can place the victim at increased risk.

Of all denominations surveyed, Salvation Army church leaders were found to be the most likely to have dealt with DFV situations (88% of Salvation Army leaders, compared with 67% of all Australian leaders). In addition, nearly all (93%) had referred a victim of DFV to support service agencies. They were also the most likely to have undertaken a safety risk assessment. 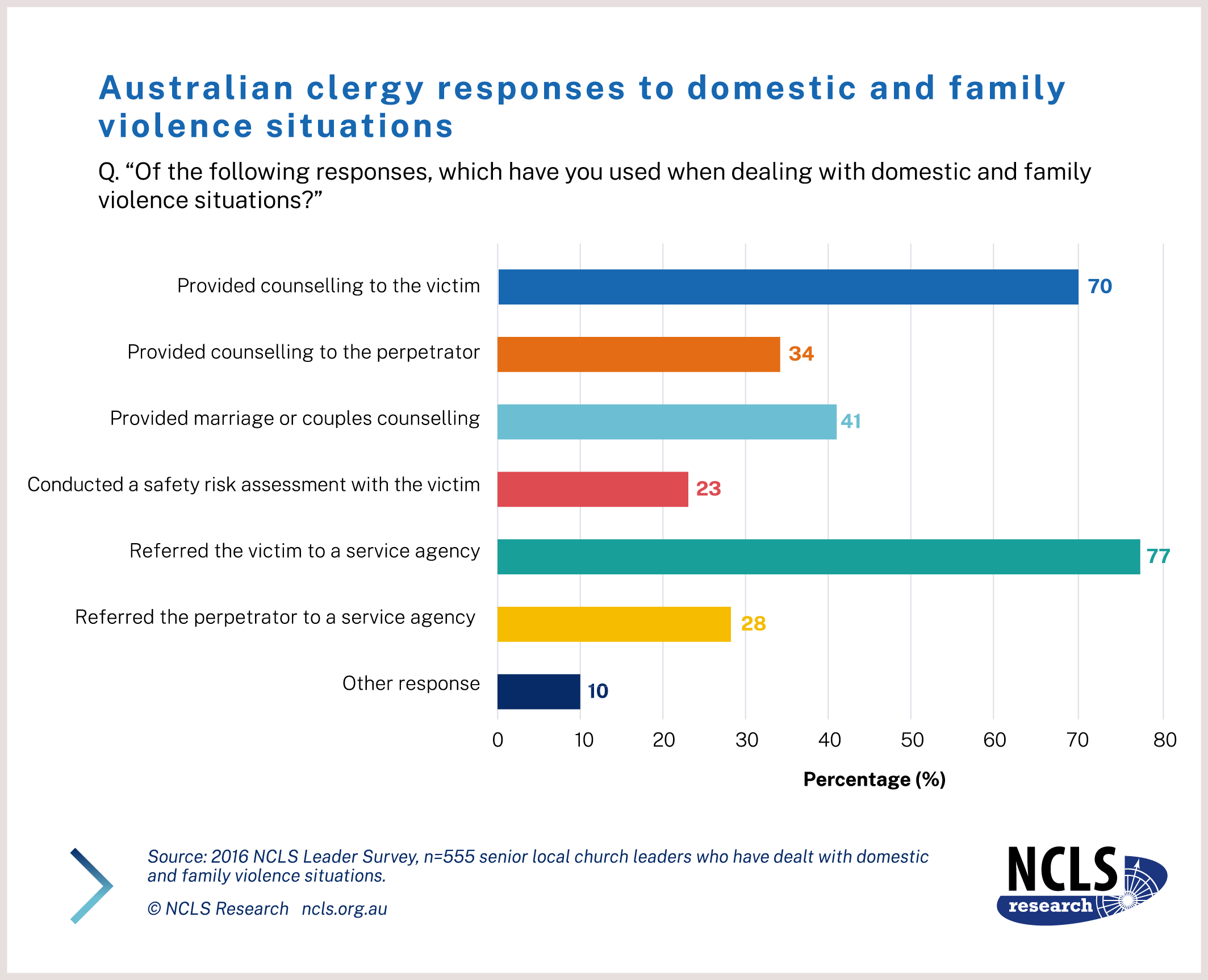 Most clergy familiar with support services

The survey results also show that most senior local church leaders, 74%, are familiar with support services to some degree. While a strong proportion of church leaders (57%) said they were ‘somewhat familiar’ with local DFV support services, only 1 in 6 (17%) said they were ‘very familiar’ with these services. Very few, only 4%, were not familiar at all. 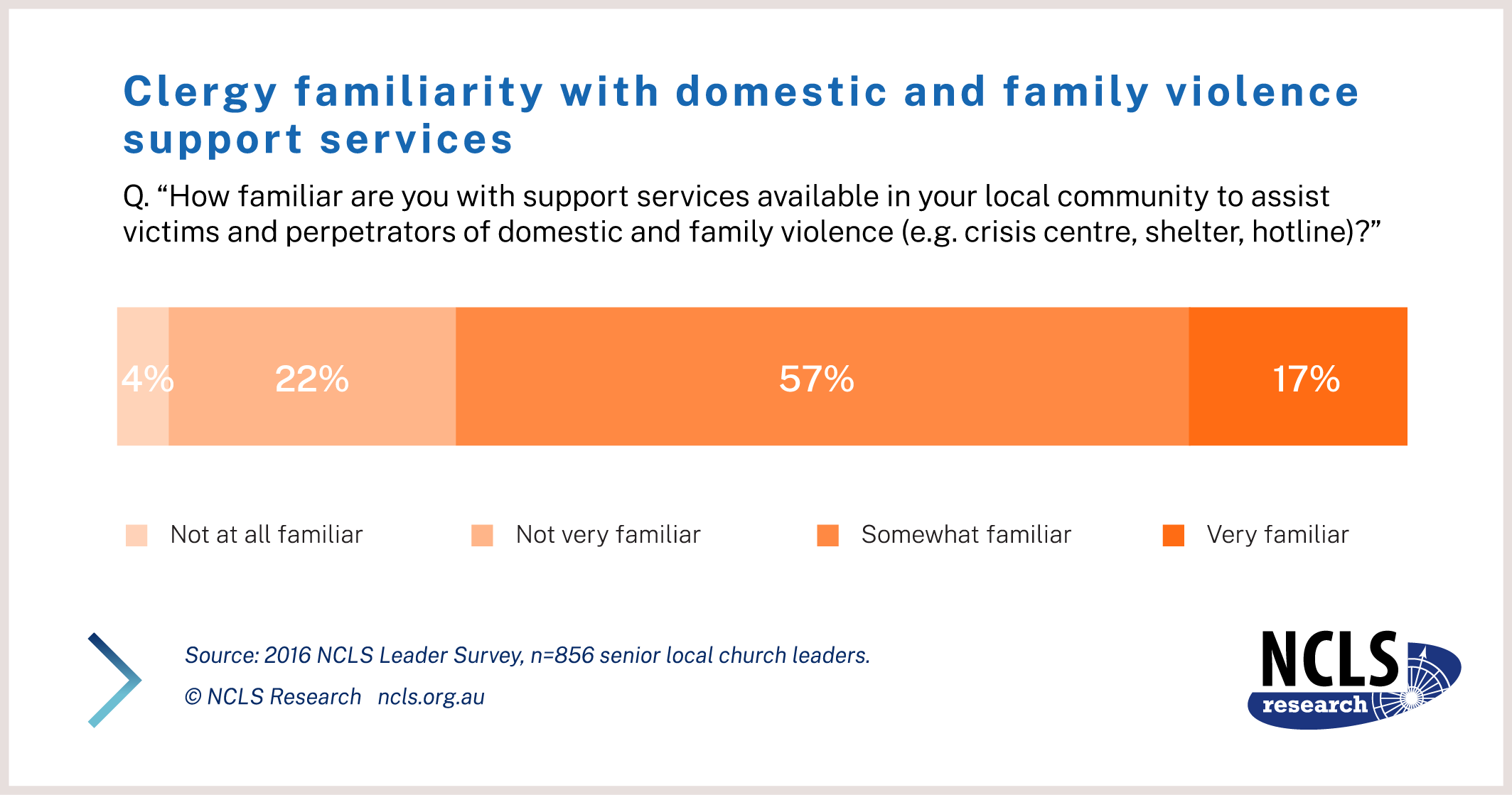 Confidence of churchgoers to approach church for help

According to the 2016 survey of church attenders, nearly two-thirds of Australian churchgoers (64%) said they felt they could go to someone from the church for help, if they, or someone they knew, were experiencing DFV. Three in ten (29%) were unsure and some 7% said they would not go to the church for help.

Given many churchgoers (64%) expressed confidence they could go to someone from the church for help regarding a situation of DFV, there is room for growth in the way clergy respond to this problem. Better bridges could be formed between churches and specialist DFV support services.

More research needs to be done, and practices put in place to ensure churches can be part of effective support networks in situations of Domestic and Family Violence. The effective response of The Salvation Army could be a useful starting place as a case study.

The Salvation Army is well known for its mission to people facing hardship. Its local church structure integrates with its social service work, and many of its clergy (officers) are involved in welfare programs. Input from their leaders could help other denominations streamline their response to DFV and better empower those affected.

* Note: Leader results are based on n=883 “senior local church leaders” (ministers, pastors or priests who are the primary or senior leader of a local church or who have equal standing in the ministry team, as well as laypeople serving as the principal leader in a local church) who participated in the 2016 NCLS Leader Sample Survey.  Some 96.5% were clergy. Data are weighted to correct for differences in participation across denominations. Some 14 denominations and movements are included in the analysis, accounting for 89% of the estimated number of senior local church leaders in Australia (not including Orthodox, independent or house churches).

Attender results are based on n=1,270 church attenders who participated in the 2016 NCLS Attender Sample Survey L. Some 59% were female and 36% were born outside of Australia, including 23% from a country where English is not the main language spoken (primarily a country in Asia).

An invitation to a new conversation about climate change

Which religions do Australians affiliate with?

What is meant by the 'vitality' of local churches?