In 2018, Australians' attitudes to the roles of religion in society and the benefits of religious diversity for Australia were mixed, with roughly a third each who are positive; neutral or unsure; and negative.

A significant decline between 2016 and 2018 in the proportion who agreed that “religion is good for society” is worth noting (from 39% to 33%), making it  an important indicator to track in the current and future social context.

A person’s attitude to religion will be shaped by a range of things. Some will have a positive emotional response based on their own personal experience of faith, meaning and purpose, positive events or experiences of support or belonging from a religious community. Others will experience negative emotions because of bad past experiences.

Previous research has found that a person’s own religious history, such as their childhood connections or family involvement, has an impact on their attitudes. Contact through religious activities, such as Christian church services, weddings and funerals, or other special religious events will also shape current attitudes. In addition to these direct experiences, people receive information through the mass media, arts, political commentary and so on which have varying degrees of impact on their views.

One purpose of the 2018 Australian Community Survey by NCLS Research was to understand current Australian attitudes to religion. As well as the general and ongoing decline over recent decades of religious identity and practices, this survey was conducted against a wider context within Australia which is likely to have had an impact on attitudes. Some of the national contextual features at the time of this survey included public engagement with outcomes and responses to the Royal Commission into Institutional Responses to Child Sexual Abuse, and law reform to allow same-sex marriage being linked to broader discussions about the protection of religious freedom. International news about matters where religion was a factor are also likely to have had some level of impact on Australian views.

Indicators of attitudes were selected, including a general assessment of whether religion is good for society and the value of religious diversity for Australia.

Australians were asked whether they agreed or disagreed with the statement “Religion is good for Australian society”.

These 2018 ACS results show lower levels of affirmation for a positive role of religion in society than two years earlier. In the 2016 ACS 39% of Australians agreed that religion is good for society, 40% were neutral/unsure and 21% disagreed. 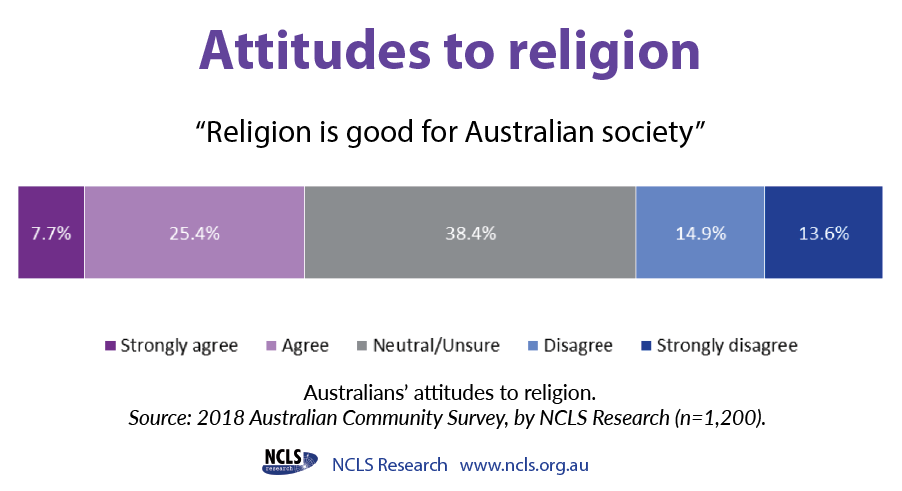 To explore Australian attitudes to religious diversity and the role it plays in Australian society, respondents were asked whether they agreed or disagreed with the following statement: “Having people from many different religions makes Australia stronger”.

The overall patterns are similar to the general question about whether religion is good for society. Some 29% of Australians agreed that having people from many different religions makes Australia stronger, 36% were neutral/unsure and 35% disagreed.

While it is evident that Australians' value of religion in society is mixed, the lower levels of affirmation in recent years make this indicator worth future tracking, seeking to understand the social context in which such attitudes are shaped.