Home / Articles / Ministry roles - what should be done vs actual reality

Ministry roles: what should be done vs actual reality

Church leaders practise and prioritise a diversity of roles, depending on the needs of the church, the resources and other support that is available, and their own passions and sense of vocation.

We examine the gap between the roles local senior leaders actually carry out, compared with what they feel should be their main roles.

In the 2016 NCLS Leader Survey, leaders were asked to:  "Mark what you think are the main roles you ACTUALLY carry out, and what you think SHOULD BE your main roles. (Mark up to THREE options)"

What leaders are actually doing

The most prevalent main roles that local senior leaders said they actually carried out were "conduct worship/administer sacraments" (60% of leaders) and "teach people about the Christian faith" (58%). "Administer the work of the local church" and "visit, counsel and help people" were the main roles for 42% and 35% of leaders respectively.

The results differ significantly by denominational group. Catholic and Mainstream Protestant leaders were much more likely to conduct worship/administer sacraments as one of their main roles than their counterparts in other denominations (especially the Pentecostal movements), and Catholics were less likely than Protestants to teach.

Pentecostals were the group most likely to train people, and to develop a vision and goals. Visiting and counselling did not vary between the denominations.

What leaders think they should be doing

When it came to what the leaders thought they should be prioritising, the most preferred roles, indicated by approximately half of leaders, were “teach people about the Christian faith” (56% of leaders), “train people for ministry and mission” (52%) and “conduct worship or administer the sacraments” (48%).

Again, there were large differences between denominations. Only a minority of non-mainstream Protestants felt they should be conducting worship/administering the sacraments as one of their three main roles – teaching, training and vision-casting were much more important to these leaders. The most important roles for Catholics, by a substantial margin, were worship/sacraments and teaching. Mainstream Protestants felt that their main roles should be worship, teaching and training. 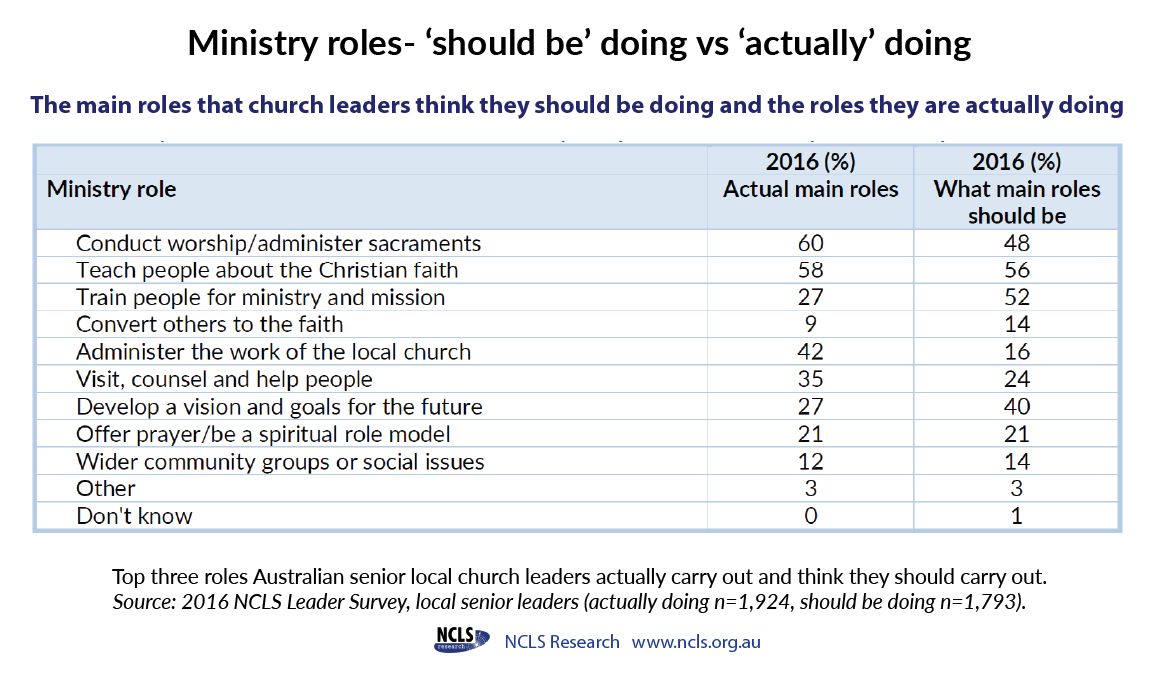 The gap between 'actually' and 'should be' doing

The difference between what leaders are actually doing and what they believe they should be doing is important to consider. When there is a strong sense of integration between practices and preferences leaders are likely to have a stronger sense of being effective in their role and also less likely to burn out. However a mismatch between practices and preferences could be cause for concern.

Roles met aspirations for at least eight in 10 leaders in the case of “convert[ing] others to the faith”, “offer[ing] prayer/be[ing] a spiritual role model” and “involvement in wider community groups or social issues”.

The ministry areas of largest mismatch where leaders indicated they should be doing more were “train people for ministry and mission” (this was a preference but not an actuality for 31% of leaders), followed by “develop a vision and goals for the future” (19% of leaders).

In contrast, the main area where leaders indicated they were doing more than they believed they should was “administer the work of the local church” (an actuality but not a preference for 31% of leaders). This was followed by “visit, counsel and help people” and “conduct worship or administer the sacraments” (both 18% of leaders).

More details can be found in the full research paper 'Senior Leaders in Local Churches: A Demographic Profile and Leadership Snapshot' 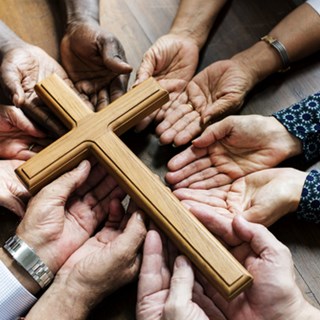